Postponed due to the Corona situation. New dates will be announced in due course. Click here for the original CfP: Bangladesh Studies across disciplines
Zeitschrift für Indologie und Südasienstudien
South Asia Institute Papers

The second issue includes an introduction by the main editors Max Kramer and Jürgen Schaflechner (Department of Modern South Asian Languages and Literatures, SAI)  and films and essays by:

Can the university students show a ray of hope for India? Film "Campus Rising" explores the struggle of students reclaiming freedom and justice in India´s universities in 2016-17. Shot at 6-7 campuses such as HCU, JNU, BHU, and Delhi University, the film documents the students´ struggle for issues such as discrimination due to caste, gender, and religion, etc. in many towns.

Navigating around stereotypes of Islam and non-Muslim belonging in Pakistan, Thrust into Heaven showcases instances of so-called “forced conversion” of Hindu girls to Islam. These incidents often follow a sequence: a young Hindu woman disappears from her house or place of work, and resurfaces again as a married and newly converted Muslim. Once a conversion occurs and has been publicly announced, a combination of legal issues and the street power of extremist religious groups makes it nearly impossible for newly converted women to go back to their former life. On the one hand, some of these conversions are utilized to conceal criminal acts including kidnapping, human trafficking, and rape. On the other hand, they are examples of female agency and ways in which young women navigate through Pakistan’s rigid patriarchal society. Struggling for a dialogic approach to this sensitive topic, this film aims to give room to the various interpretations that emerge around the alleged forced conversion of Hindu women to Islam in Pakistan.

The film Shahbaz Qalandar explores the vital role played by the Qalandariyya Sufi Order in the spiritual life of the town of Sehwan in Sindh, Pakistan, the last remaining center of Qalandari dervishes in the world, and a major hub of intersectional piety in the wider region. Shahbaz Qalandar is a scholarly intervention into popular discourse, deploying the audio-visual impact and accessibility of film, with the aim of highlighting the religious coherence and historical continuity of the Islamic spiritual center at Sehwan. This paper is a collaboration between Hasan Ali Khan and Aliya Iqbal Naqvi: it reflects on the film-making process as experienced by academic scholars.

Ghungroo is a film that aims to critically reorient dance in the contemporary cultural landscape of Pakistan, focusing mainly on the lived experiences of Dawood Bhatti, a Kathak dancer. Bhatti tackles the binary representation of gender and thus is emblematic of emergent discourses on gender identity and dance in Pakistan. Ghungroo is the depiction of struggle and success derived from the freedom of a gender-fluid identity, using dance as a subversive medium with the power to explore the boundaries of power and patronage. 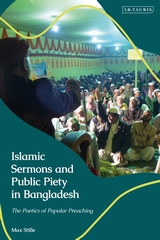 Islamic sermon gatherings are a central form of public piety and public expression in contemporary Bangladesh. Held since the 19th century, waz mahfils became so popular that it is today possible to participate in them on a daily basis in many regions of the country. Despite their significance in the rise of popular politics, the sermons are often disregarded as Islamist propaganda and very little research is dedicated to them.

This book provides unprecedented access into these sermon gatherings. Based on fieldwork and interviews, Max Stille analyses an archive of several dozens of sermons. He shows how popular preaching shapes roles and rules of what can be said, imagined, and felt. Waz mahfils are a participatory practice of the labouring classes in which religious, political and poetic consensus overlap. In them, Islamic tenets and morals are part of dramatic narrations, vocal art and affective communication, ranging from immersion and upheaval to laughter about political jokes and parody. Suggesting new ways to interpret musical and performative poetics of Islamic speech, this book calls for expanding conceptions of civic participation and public discourse and rethinking the role of the senses and religious aesthetics in Islam. As part of the co-operation between the Draupadi Verlag in Heidelberg and CrossAsia-eBooks selected non-fiction books from the publishing programme, for which no new edition is scheduled, will be made available as Open Access publications on CrossAsia-eBooks. The dissertation Train Friends: Frauenfreundschaften im indischen Nahverkehrszug Ladies Special by Ninette Preis, which was published in print in 2010, is now available online as an Open Access publication on CrossAsia-eBooks.
The book can be downloaded as a complete PDF or in single chapters. The printed edition is still available in bookstores or directly from Draupadi Verlag.

The South Asian Institute welcomes Dr. Justyna Kurowska as Research Assistant at the Department of Modern South Asian Languages and Literatures. She studied Indology at the University of Warsaw and Hindi at the Centre of Indian Languages, Jawaharlal Nehru University, New Delhi. She received her PhD in 2019 at the Institute of Oriental Studies, Warsaw University on the modern Hindi novel´s approach to death, dying and the dead body.

Prior to joining SAI, she worked as a Lecturer at the Institute of Oriental Studies, Adam Mickiewicz University (Poland).  Since 2018, she works in two British Library funded projects within “Endangered Archives Programme”. From 2015 to 2017, she worked as a Lecturer at the Department of Linguistics and Philology, Uppsala University and between 2009 and 2015 as a Research Assistant at the Bonn University, where she taught several undergraduate and graduate courses in Hindi, literature and film of South Asia.

Her research interests are in memory studies, modern Hindi literature, with focus on the novel, death, body, and violence, written and oral narratives, especially of convicts from the penal colony in the Andaman Islands.